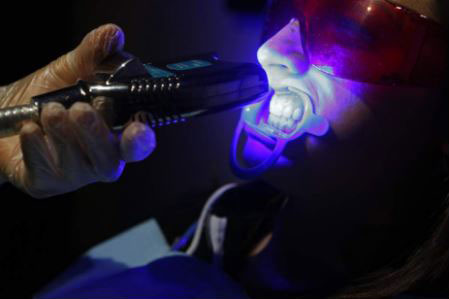 Don’t expect to see Rabbine Harpell waking up over a cup of hot tea in the morning. She’s given up the stuff since realizing how badly it was staining her teeth.

Harpell, the owner of Azura Studio, performs teeth whitening in her salon and spa in downtown Bend. She also offers clients a number of tips for preserving their pearly whites: Give up red wine and coffee. Use a straw so the liquid doesn’t splash all over your teeth.

Avoiding those drinks would be next to impossible for some. For those people, the occasional teeth-whitening treatment might be a more realistic option.

The sheer number of teeth-whitening options has exploded in recent years. Today, there are gels, strips, chewing gums, paint-on products, rinses and toothpastes. They’re found everywhere from dentist’s offices to drugstores. In more recent years, they’ve come to be offered in mall kiosks and salons like Harpell’s.

But there are important points to consider before choosing a method. One of those is how much whiter you want your teeth to be. “If you’re going to spend the money, go to the dentist,” Harpell said. That’s where you’ll get the most dramatic results.

A number of dentists in Central Oregon offer teeth-whitening procedures. Most involve placing a protective barrier over the gums and applying a bleaching gel to the teeth. Some also use lamps designed to speed up the whitening process.

At East Bend Dental near St. Charles Bend, dentist Taylor Fowles offers clients a couple of options. A professional, high-powered bleach applied in the office is the most effective and expensive method. It takes an hour and a half and requires placing protective material over the gums. A staff member monitors patients during the procedure to ensure the bleach doesn’t touch their gums, lips or cheeks, which could cause burning.

One step below that are trays clients take home. They inject a clear bleaching gel into the trays and wear them for about 30 minutes per day until they get to the color they want, Fowles said. The clinic offers a couple of tray methods.

At Azura, Harpell also applies a bleaching agent but then focuses an LED laser onto the teeth to speed up the whitening process.

Generally, getting whitening done at a dentist’s office will cost more than buying products at the store or going to a salon. Harpell said she charges $99 per 45-minute session, while Fowles charges between $200 and $400 for the procedures, depending on which one the patient chooses.

Harpell said her method is better for people whose teeth are too sensitive for the stronger bleaching agents used in dentist’s offices. Fowles said it’s rare that anyone’s teeth are too sensitive for his in-office procedure. If someone can take a bite out of an ice cream cone without their teeth hurting, that’s an indication they’ll likely be able to handle the procedure, he said. For cold-sensitive teeth, he recommends the trays.

Then there are the methods available in stores: whitening strips, trays and rinses, which rely on hydrogen peroxide as the bleaching agent, and toothpastes, which rely on polishing or other chemical agents to remove surface stains, according to a 2012 report by the American Dental Association’s Council on Scientific Affairs. Many over-the-counter products contain 10 percent carbamide peroxide, which breaks down to yield approximately 3.5 percent hydrogen peroxide.

In its 2012 report, the ADA said common side effects of the peroxide-based bleaching agents are tooth sensitivity and occasional tissue irritation, particularly in the gums. Both of those issues tend to stop after treatment.

Fowles has no problem with clients trying over-the-counter whitening products, so long as their teeth are straight and don’t have lots of nooks and crannies, and they aren’t looking for a dramatic change. It’s much cheaper than going elsewhere and can be less time-consuming.

Currently, the only teeth whitening product that’s earned the ADA’s Seal of Acceptance is theOpalescence Whitening Gel 10 percent in regular, mint and melon by Ultradent Products Inc. The product is intended to be dispensed at dentist’s offices and used in whitening trays, but it’s also sold through online retailers. The ADA gives the designation to products whose safety and effectiveness is demonstrated in objective clinical trials, that contain Food and Drug Administration-approved ingredients and whose packaging claims are supported by science.

Both the ADA and Fowles, however, warn people should be actively seeing a dentist. No one should be whitening their teeth if they have untreated cavities, Fowles said.

“Even when people just come in for whitening, I always go in and just look and make sure you don’t have any gigantic cavities,” he said.

The one thing Fowles discourages people from doing is brushing their teeth with baking soda. While doing so will certainly whiten your teeth, it essentially scrubs off the enamel, which is obviously not good in the long term, he said.

“People will do that and they have pretty white teeth, but over time, they can destroy their teeth,” he said.

After having their teeth whitened at her studio, Harpell lets people know they can’t eat for at least two hours, and they can’t eat foods that stain teeth — berries, chocolate, salsa, coffee, red wine — for 24 to 48 hours. They also can’t be pregnant or breastfeeding in order to receive the treatment.

Harpell tends to offer coupons a lot because she thinks everyone deserves bright, beautiful smiles. She said she loves watching clients marvel at the results before they leave.

“They walk out just flying high,” she said. “It’s beautiful.”