Living From the Heart 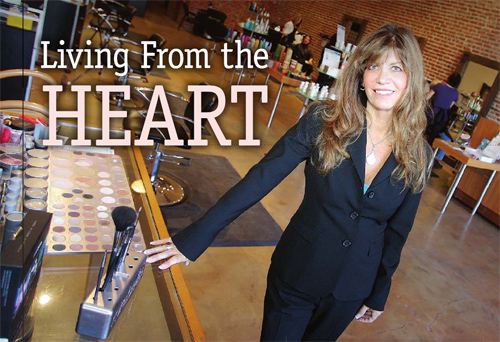 In times of hardship, many of us hunker down to protect what we have. We gather our closest loved ones together, protect our resources, and stay clear of risk.  It's natural behavior, after all, and as a result businesses are closing and community organizations are seeing a dramatic drop in contributions of time and money.

But Rabbine Harpell has a different approach to life's hardships. When times get tough, she gets tougher, focusing even more on her personal mission to help others. Harpell opened a new business in downtown Bend just a few months ago during the midst of the recession. Azura' Studio is an innovative venture, combining salon services with state-of-the-art self-healing modalities.

It may seem like an odd time to open a new service-oriented business, but Harpell believes this "is a time to support each other and do what we have to do, to ride out the recession. We offer hope to people coming in stressed out and anxious. We've created an environment to relax."
Offering support to others seems to be a recurring theme in Harpell's life. As a young girl, she made peanut butter and jelly sandwiches for the homeless even though her own family, she said was "poor." As a young adult, she worked as a nurse in a charity hospital in New Orleans. She went on to become a political consultant in Washington DC, working on projects to help Nicaraguan refugees and other international communities in need.

When she moved to Bend in the early 1990's, Harpell founded Jubilee Productions (formerly Jubilee Communications) which produces concerts, festivals and other events with a special emphasis on veteran and other charitable organizations. Currently, she serves on the advisory boards for the Oregon National Guard Youth Challenge and Central Oregon Veternas Outreach, and she opens her home to neightborhood kids to hang out and play Xbox or watch TV. Mike Ward is the State Commander for the disabled American Veterans and has known Harpell since 2003.  "She has an impressive resume," he said, "and if you know her, you understand."

Bob Cusick, Quartermaster for the local VFW, described her as "200 percent for the community." Ward and Cusick have worked with Harpell on the annual Veteran's Day Parade as well as other projects locally. Harpell describes this drive to helping others as her call to duty.

"My passion is to be a good influence behind the scenes, to uplift others," she said.

She doesn't think she's alone in this campaign for the community, however. She believes that each voting citizen holds the higest office and that it's everyone's duty to help one another. Ward described her as "the ultimate American, probably the most patriotic person I've ever met." Patriotism and a passion for helping others are commendable characteristics, but Harpell has been blessed with a few other traits that seem to further support her endeavors and increase the liklihood of success. She's a high-energy person with a strong work ethic. She works from four computers and multiple phone lines in her home office, runs daily, sleeps only five or six hours each night, and she says shes' on call 24/7.

Ward said she "goes, goes, goes," and Cusick described her as someone who puts "a lot of herself" into a project. "You know it will be successful and you don't have to worry about it", he said. When she began to research the self-healing technologies, she ultimately incorporated into Azura, she reached out to numerous physicians and specialists around the globe, including some in Japan, Canada and at the Mayo Clinic in Minnesota. "You do your research, learn from the best and figure out how to do it even better," she said.  "If you're flexible and resilient, you can do anything you want through focused thought and commitment."

Harpell has good interpersonal skills, as well. She greets visitors at Azura' with an enthusiastic smile and likes to leave the doors open so guests feel confortable stopping by. "She'll sit down and listen to you with sincerity and all her heart," Cusick said.  Because she's so sociable, he said, she can communicate with anyone while making it enjoyable.

Harpell also boasts great vision. Even as she's still getting her new studio up and running, she's coordinating a major concert to be held in San Diego next spring, writing a novel, and formulating plans to travel to the Middle East with the ultimate hope of producing an international concernt in Jerusalem.

And while her mind has the ability to run in high gear and in many directions, Harpell said she's also learned to "master" her mind.  She chooses what to think and doesn't leave any room for clutter. "Minds are like wild horses, and I decided to take control and gain inner peace," she said. When negative thoughts or emotions try to pry their way in, she releases them, "like opening a window and letting the air flow freely." Spending a few minutes with Harpell at her new studio is like a crash course in a study of who she is.

She greets you with warmth, gives you a quick but comprehensive tour of everything the studio offers, treats you to her philosophies on citizenship and international community, settles you into an anti-gravity swing chair intended to be reminiscent of the womb, and stands by your side as you swing with a few nurturing words about life, and peace, and love.